How Might Virginia’s New Legislative Trifecta Affect Employers in the Commonwealth in 2020?

In the November 2019 election Virginia gained a Democratic “trifecta”—both legislative chambers and the governorship are now controlled by one political party. It has been over two decades since Democratic lawmakers constituted the majority in the Commonwealth. What will this mean for Virginia employers during the coming year?

One means of tea leaf reading is taking a look at what happened in the six states that similarly gained Democratic trifectas following the 2018 midterm elections (Colorado, Illinois, Maine, Nevada, New Mexico, and New York). Collectively, these states enacted over 100 new generally applicable labor and employment laws in 2019. 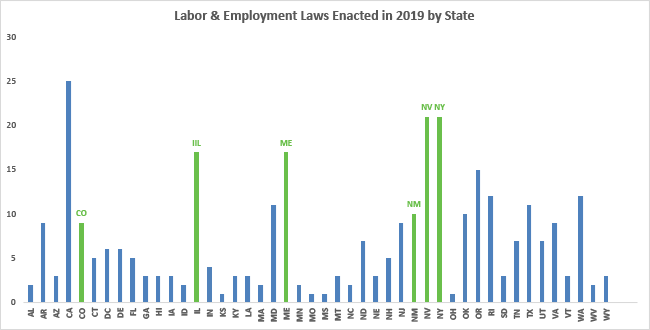 In anticipation of its new legislative majority, Democrats in Virginia have pre-filed a number of significant bills for consideration during the 2020 session.  This Insight will examine these pending measures, along with a brief recap of what other newly Democratic majority states enacted this past year.

Although state lawmakers are expected to introduce the majority of legislative proposals once the session convenes on January 8, 2020, a handful of notable bills have already been teed up for consideration. These bills address a variety of subjects, including discrimination, minimum wage, labor-management relations, marijuana, and protected time off.  The following provides a brief overview of these measures.

In Senate Joint Resolution No. 1, the Virginia legislature has proposed ratifying the Equal Rights Amendment (ERA) to the Constitution of the United States.  The key part of the amendment declares, “Equality of rights under the law shall not be denied or abridged by the United States or by any State on account of sex.” Virginia would be the 38th state to ratify the ERA, giving supporters of the amendment the three-fourth’s majority needed for constitutional amendments. Although the ERA’s next steps are uncertain, Commonwealth Democrats have made clear that ratifying the amendment is a priority.

Lawmakers appear eager to make other discrimination-related changes already in force in other states. Three proposed bills would add protections based on employees’ sexual orientation or gender identity. House Bill 21 would define sexual orientation and gender identity, and add these categories to those protected from discrimination under the Virginia Human Rights Act. House Bill 23 and Senate Bill 23 would prohibit similar types of discrimination against public-sector employees.

Another bill, SB 50, would amend the Virginia Human Rights Act to ban race discrimination based on hairstyle. The measure broadens the terms because of race and on the basis of race to include traits historically associated with race, such as hair texture and protective styles like braids, locs, or twists. Bans against hairstyle discrimination in hiring have been gaining momentum across the country.

Two senate bills, SB 48 and SB 49, would ban retaliation against employees who file complaints about lost or underpaid wages and would permit the labor commissioner to investigate any such complaints, respectively.  If the commissioner were to find an employer has violated wage laws, SB 49 would authorize the commissioner to bring a proceeding on behalf of an employee to recover wages, even without written notice of the violation or signed consent from an employee.

Many states in recent years have enacted laws allowing employees to take protected time off, sometimes paid, for a variety of reasons. One measure already pre-filed in Virginia addresses parental leave for school-age children. The bill, HB 64, would require employers to grant parents or guardians four hours of unpaid leave per year to attend school conferences, volunteer activities at the school, or other school events.  Employers and employees would have to agree to the leave time; employers could mandate that an employee request the leave time in writing at least 48 hours in advance.  Employers would also be allowed to request written verification that the employee participated in the school event at the time leave was requested.  Employers would, however, be banned from retaliating against employees who request leave.

Virginia lawmakers are also drafting a bill that would create a paid family and medical leave insurance program. Under the terms of the proposal, which has been reported on but not yet formally introduced, employers and employees would share the cost of the paid leave insurance premiums. The program would fund up to 80% of an employee’s salary during the covered family or medical leave, which an employee could take for up to 12 weeks.

Virginia Democrats are also considering measures to strengthen unions. First on tap is HB 122, a bill to reverse the state’s ban on project labor agreements (PLAs). The bill defines PLAs as pre-hire collective-bargaining agreements setting the terms and conditions of employment on public-works projects. While Virginia law currently forbids state agencies from requiring PLAs, the bill would expressly authorize them to do so. Contractors and subcontractors could thus be required to sign on to collective-bargaining agreements as a condition of doing business with the state.

Other measures could expand public and private collective bargaining. Currently, Virginia is one of only a handful of states flatly prohibiting collective bargaining by state agencies. Lawmakers have publicly discussed repealing that ban. They have also discussed repealing the state’s right-to-work law, one of the oldest in the country. While bills on these subjects have not yet been introduced, the Virginia AFL-CIO has expressed optimism that both measures will pass in the 2020 session.

What Other Democratic Trifecta States Enacted in 2019

Following the 2018 mid-term elections, a handful of states went from politically divided legislatures to a unified, Democratic trifecta.  As a result of this changeover, these states enacted a number of labor and employment bills that had failed to advance under prior administrations. Their legislative trajectory could be a harbinger of things to come in Virginia. 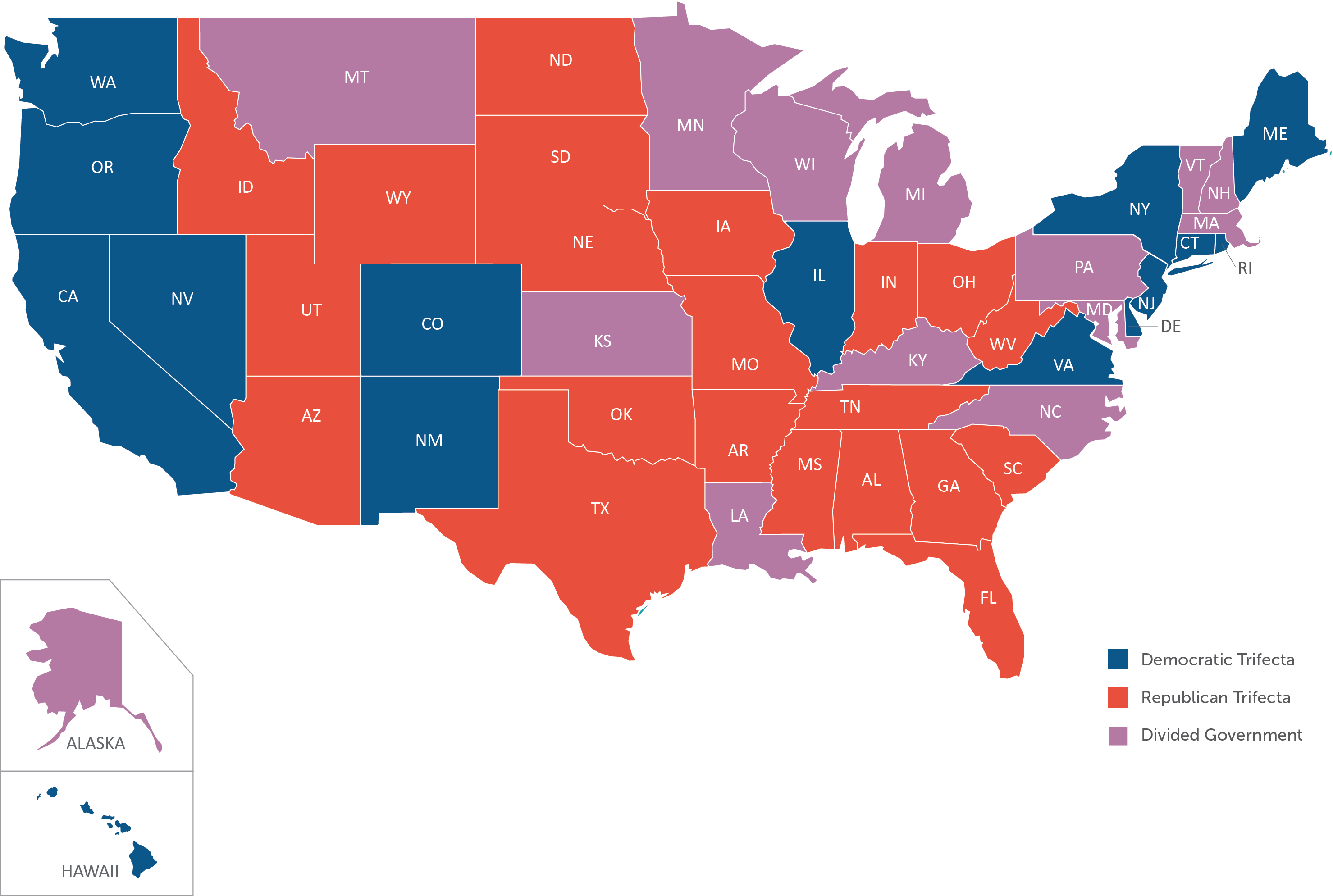 Illinois: The Land of Lincoln enacted nearly 20 new labor and employment laws over the past year. Notably, Illinois revised its Equal Pay Act, providing broad pay discrimination protections to workers, and imposing salary history restrictions. The state also enacted new laws establishing a $15 minimum wage and permitting recreational marijuana use. Illinois also enacted a sweeping anti-harassment law that contains mandatory training requirements and limits on arbitration agreements. Illinois became the first state to enact a law creating a framework for an employer’s use of AI in the hiring process. And in another move bucking the trend, Illinois passed a ban on right-to-work zones, as part of its Collective Bargaining Freedom Act.

Maine: The Vacation State enacted several new labor and employment laws of its own in 2019, including those addressing salary history restrictions, pregnancy accommodation, paid leave, and non-compete agreements.

New York: Like a number of other states this year, New York enacted a law limiting salary history inquiries. The Empire State also enacted laws prohibiting discrimination based on hairstyles, religious attire, immigration status, and reproductive health, and strengthened its pay equity law and data security breach notification statute. Another package of anti-discrimination and anti-harassment measures signed in August 2019 focused on expanding worker protections to include contractors, lowering the burden of proof for complainants, and increasing damages and attorneys’ fees that may be awarded for such claims. The state also enacted a law providing protections for victims of domestic violence, and up to three hours of paid time off to vote.

States and localities are leading the charge when it comes to labor and employment law changes.  As expected, states that are not politically divided tend to be more successful in advancing new bills. The legislation Virginia lawmakers have already pre-filed provide a good indication as to where the legislature’s priorities lie in the year ahead. A look at what the newly Democratic states were able to enact following the 2018 elections indicates Virginia could soon take their lead.

Is Foresight 2020? Employers Confront New Laws Taking Effect in the New YearMinimum Wage, Tipped and Exempt Employee Pay in 2020: A Rates-Only UpdateLittler Lightbulb: Shining a Light on Key Issues as we Leap into 2020