By Denise M. Visconti on

Dear Littler: I work in HR at a large, California-based company with branches across the country. We pride ourselves on our diverse and inclusive workforce, and encourage employees to self-identify their race/ethnicity and sex. Last year a number of employees left the "sex" and "race" categories blank, saying they were too limiting. This year I'd like to amend the forms to include a "non-binary" option in addition to "male" and "female," and an "other" category to race/ethnicity. This seems like a simple way to make all employees feel welcome. Are there any issues with my doing so?

It's great that you recognize the importance of creating a working environment that is inviting and accepting. In fact, your home state of California recently enacted a law that will require a more inclusive approach to HR paperwork.  There are some nuances to self-identification in certain situations, however, that will warrant a thoughtful approach to revising the voluntary self-identification forms for both sex and race.

With respect to self-identification regarding sex, it's laudable that your company acknowledges the complexity of gender identity, which is distinct from one's sexual orientation.  Individuals who identify as "non-binary" might include those who are transgender, gender non-conforming and intersex.  These individuals have gender identities that do not fall exclusively in man/male or woman/female categories,1 so committing to one sex or another on an employment form might be unduly restrictive.

A number of states and localities over the past couple of years have gotten in front of the issue by enacting laws or ordinances allowing individuals to choose a third option on local government documents such as drivers' licenses and birth certificates. In California, the Gender Recognition Act of 20172 implemented a third, non-binary gender marker for California birth certificates, drivers' licenses, and other identity cards. The law also eliminated the requirement to obtain a doctor's statement and attend a mandatory court hearing when filing a gender-marker change petition. Notably, under the law an employer cannot force employees to select "male" or "female" as the only gender-marker options on employment paperwork unless federal law so requires.

So, Guarded, some states and localities already provide non-binary options on official documents, and—as is the case in California—obligate employers to be less restrictive when it comes to self-identification on employment applications, insurance forms, and other employment paperwork.  It is therefore recommended that your human resources department go ahead and examine the company's forms and databases to ensure a non-binary gender option is provided. Similarly, employers are encouraged to be flexible when it comes to race self-identification, where some might prefer to check an "other" box rather than feel constrained by the usual offerings.

That said, as mentioned, there is an important caveat: federal law requirements. Specifically, if your company is required to file the Standard Form 100 (EEO-1) Employer Information Report, you will need to establish a separate process to ensure compliance with that federal mandate.

What Does the EEO-1 Have to do With This?

Your question doesn't clarify whether your company does any business with the federal government, but you do mention that your organization is large. Generally, if your company employs 100 or more employees, or if it is a federal government contractor or first-tier subcontractor with at least 50 employees and does at least $50,000 in business with the federal government, it is required to annually submit by March 31 (although this year the deadline was extended to May 31 due to the government shutdown) an EEO-1 report with the EEO-1 Joint Reporting Committee.5 On this survey the covered employer must report all employees categorized by race, gender and job category.

Both the Equal Employment Opportunity Commission (EEOC) and the Department of Labor’s Office of Federal Contract Compliance Programs (OFCCP) use the information on the EEO-1 to monitor compliance with federal anti-discrimination law, support civil rights enforcement and analyze employment patterns.6 For example, Executive Order 11246 prohibits covered federal contractors from discriminating in employment decisions on the basis of race, color, religion, sex, sexual orientation, gender identity or national origin, and requires these entities to take affirmative action to ensure that equal opportunity is provided in their workforces.

Penalties for EEO-1 noncompliance could be significant for a federal contractor. The OFCCP can terminate or suspend all or part of an existing contract, and bar the contractor from future business with the government. Although there are no civil penalties for most employers' failure to comply with the EEO-1's reporting requirement, the EEOC can seek a court order to compel compliance.  And there are steeper penalties for employers that willfully file false EEO-1 reports.

Unfortunately, the categories on the EEO-1 report are relatively inflexible.

With respect to gender reporting, in the past, employers were required to classify each employee as either "male" or "female."  Recently, the EEOC provided guidance on how employers should report employees whose gender identity is neither “male” nor “female.”  Specifically, the EEOC released an FAQ stating that employees who identify as non-binary should be listed in the comment box on the EEO-form along with the other required information (pay band, job category, race, ethnicity) pertaining to those employees. This information should be accompanied by the phrase “Additional Employee Data.”

Between a Rock and a Hard Place?

So what is an employer to do if employees refuse to identify their race or sex, or present valid IDs that includes a non-binary gender marker, for EEO-1 report purposes?

The EEOC has already addressed this issue with respect to the failure to self-identify race/ethnicity. In this instance, the employer can resort to existing employment records or have an observer make the call.  It is recommended that—if possible—someone in HR who doesn't supervise or otherwise make employment decisions regarding the employee make this determination. This of course gets a little more difficult when an observer is required to make a gender identification.

Your initial inclination to amend your company's paperwork to provide a non-binary gender option is not only permissible, but in your state's case, a necessity. It is recommended that in addition to reviewing current forms and applications, your company review language used in handbooks and other employment policies with an eye toward gender-neutral terminology.

If your company is indeed required to file an EEO-1 report and an employee presents an ID with a non-binary gender marker, you should follow the EEOC’s FAQ and list each such employee in the comment box, along with all of the other necessary information.

If an employee declines to self-identify, however, you will still need to obtain information necessary for the report's submission. This can be done on an individualized basis or a separate form, depending on how many employees are affected.

To facilitate this potentially awkward process, emphasize at the outset that any self-identification is voluntary, and explain why the information is being collected—e.g., federal law requires the company to maintain a record of each employee’s sex and race or ethnicity, and that the company is limited to the categories listed on the EEO-1 report.  Explain that voluntary self-identification is encouraged, and the law will force the employer to make a determination based on available documentation or observation if the employee declines—a scenario that's potentially uncomfortable for all involved, so voluntary identification is preferred. Reassure employees that the information will be kept confidential and only be used in accordance with the provisions of applicable laws, including those that require the information to be summarized and reported to the government for civil rights enforcement.

This is also an opportunity for the employer to reiterate its position as an equal opportunity employer, as well as its non-discrimination policy.

Determining your obligation to file an EEO-1 report in the first instance, let alone completing it, can be a complicated process. Balancing employee sensitivities with federal and state law requirements adds to this complexity.  Because of the knotty issues involved, Guarded, it is recommended that you work with counsel in completing the EEO-1 report if you have additional concerns, and in drafting voluntary self-identification forms and employee communications about the process.  Best of luck.

5 The EEO-1 Joint Reporting Committee is comprised of the Equal Employment Opportunity Commission (EEOC) and the Department of Labor’s Office of Federal Contract Compliance Programs (OFCCP). 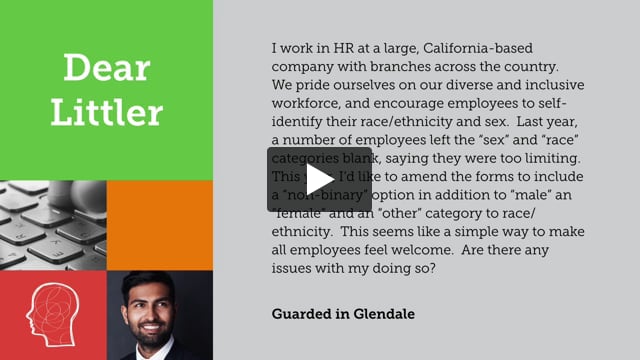